Traditional Food exploration is the most fun exploration that i have ever had. At there we learned about the Cambodian Food and Khmer Food, also we study about the khmer cuisine. Not just learn about Khmer Cuisine, we also learned about the story of each restaurant owner. On the first day of our trip we went to Siem reap and interview Mahob which is the restaurant that served Khmer food and other too. On the second day we went to Cuisine wat damnak which they served as a set of food or called as course. On the third day we went to Sugar Palm which served Khmer Cuisine food. My facilitator tell me to make a video about the Sugar Palm restaurant video. So I filmed some footage and the interview. And put together the video and here the video :

Liger Leadership Academy students are English Language Learners. They have been immersed in English since arriving at Liger, We pride ourselves on prioritizing process over product. Please excuse any English errors as part of the learning continuum our students have taken over the years. 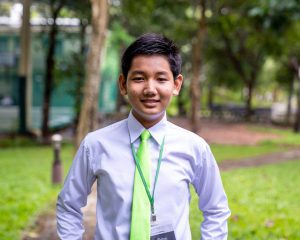 I’m Bunleap. I am a 15-year old student at Liger Leadership Academy in Phnom Penh, Cambodia. I was born and raised with my lovely family in a small town of Takeo Province.

After I received a scholarship to study at Liger Leadership Academy, It’s changed my life.

Because of this opportunity, I want to followed my dream as a developer, entrepreneur, and engineer. This three keywords contain the essence of who I am. Even though I have many dream, I still have an open heart to new experience and challenges to understand more about myself. That’s how I can see what I have achieved and what I try to achieve.